Find your study program and apply to Liberia Universities

Don't go to LIberia alone! Get connected with fellow students from your country and travel together! here

Find & apply to programs offered in following Degrees within LIberia

Choosing one of the best universities in Liberia to study for a degree program is one of the best decisions you will ever make. In fact, these schools will serve as a great beginning for your career path and also give you the right connection you need to excel in your discipline. 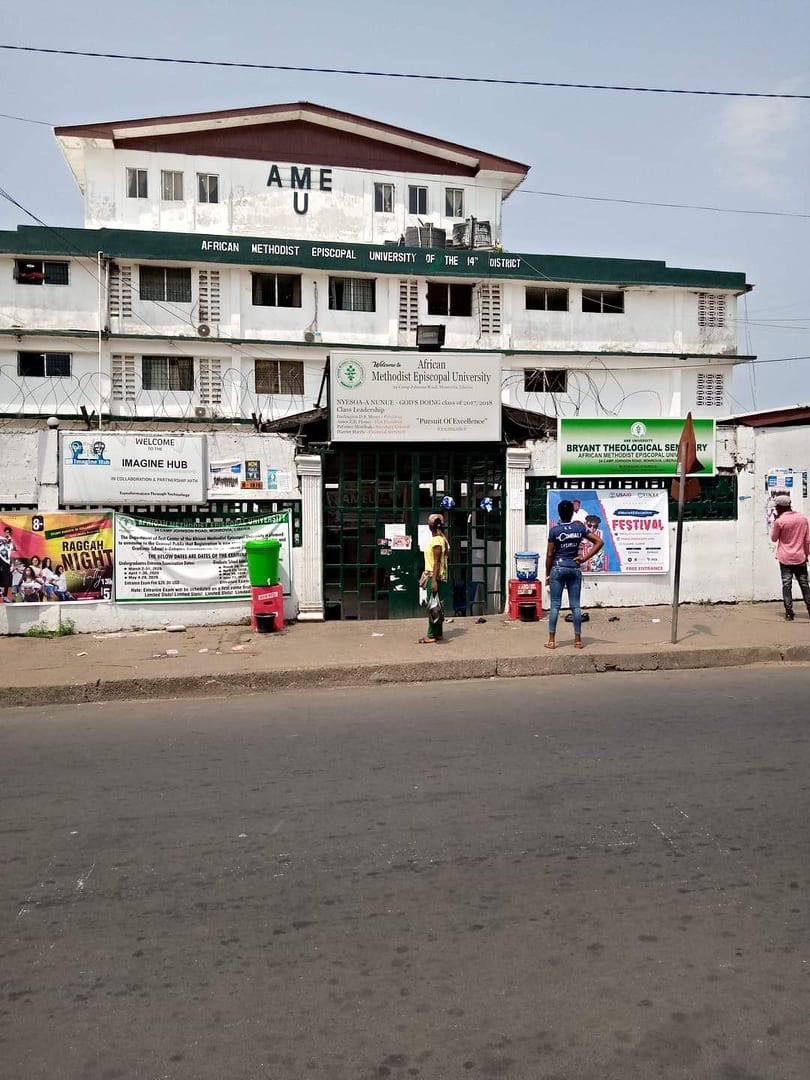 LIberia is home to world class universities and RocApply gives you the chance to compare their rankings. Read more...

Find out if you are eligible to study in LIberia and what documents you need to have in your possession. Read more…

LIberia has a traditionally rich culture which students tend to explore and enjoy. Discover the culture! Read more…

Discover how you can get to LIberia easy and cheap. Read more…

If you love shopping then LIberia might be the best place for you. Find out about shopping tricks. Read more…

Interested in knowing if they party hard in LIberia? We tell you where! Read more…

Is studying abroad your dream? Do you plan to pursue a globally recognized qualification!? Welcome to RocApply Liberia!! Liberia may not have the blossom that some countries have but certainly, it cannot be disqualified as a study abroad destination.

We have dedicated this piece to share why an option to study here may be great after all especially if you are a mind-open and research-oriented student!!

The county has not exactly had the smoothest of journeys. Discovered by freed slaves, you could say the country was built on the darker histories of the 18th and 19th centuries.

But Liberia also signified a newfound liberation for the returned victims of the Slave Trade Era. It meant a nostos to the homeland, and a country to govern all of its own.

However, growing from the seeds of colonialism in West Africa was never going to be easy, and today the country bears the scars of multiple civil wars, coups, political revolutions, and power struggles, not to mention the disastrous Ebola outbreak of more recent years.

That mentioned, things are seemingly back on and there’s certainly no denying the utter beauty to be found along the shimmering golden stretches of Atlantic coast, at the roaring surf spots and between the dense, chimp-peppered jungles of the inland.

Liberia has an incredibly welcoming environment intrinsic to every part of it. The hospitality remains an important element of daily life and you will be made to feel genuinely welcome by the people you meet.

Liberia truly has something for everyone to offer, apply today through RocApply Liberia for an academic experience of a lifetime!

More than any other country visited in West Africa, Liberia is not an every time consideration by tourists. At the beaches you may find a smattering of foreigners, almost all aid workers and expatriates taking a weekend holiday.

But why not? The country is just another place full of people living their lives, and full of interesting places to visit and experience. Though its reputation as a travel destination is diminished by the painful history of civil war, disease, and relentless poverty, the country is currently peaceful and striving for better days. The forests are dense, the beaches are gorgeous, and the people, best of all, are friendly and welcoming.

Although Liberia is still developing its education system, it commands a strong education system within its six Universities. Many foreign students around the world, with a tertiary qualification in Liberia are provided with good positions in their home country.

While this can be a driving force for international students there are quite several reasons why you should consider studying in here.

The main advantages of studying in Liberia are the following:

• Many degrees and mastery courses available..

• Students will enjoy the difference in culture and history.

• Students can choose the field of Business, Medical Science, Law, or other areas and some research opportunities are available for the right candidates.

• Schools are generally safe, as is the society, due to a police state which the country is now in.

• Transportation and communications are some of the modern conveniences you will notice in Liberia.

Liberia is a country along the coast of western Africa. Its terrain ranges from the low and sandy coastal plains to rolling hills and dissected plateau further inland.

The country is home to a lush rainforest containing a rich diversity of flora and fauna. Did you know that Liberia is the only black state in Africa never subjected to colonial rule and is Africa’s oldest republic?

The country was established on land acquired for freed U.S. slaves by the American Colonization Society, which founded a colony at Cape Mesurado in 1821!

The Liberian climate, especially on the coast, is warm and humid year-round, dominated by a dry season from November to April and by a rainy season from May to October.

The dusty and dry desert winds blow from the Sahara to the coast in December, bringing relief from the high relative humidity inland. Deforestation and drought here have affected the climate, lengthening the dry season by almost a month in some areas.

However, Liberia has year-round evergreen vegetation. Many trees such as red ironwood, camwood, whismore, teak, and mahogany are valuable, but occur with other species, preventing easy harvest.

Other trees of value found here are rubber, cacao, coffee, and the raffia palm.5 Things you didn’t know about Liberia!

1. It was created for freed slaves

The ASC founded Liberia in 1821 as a place for free African Americans to migrate to. More than ten thousand made the journey across the Atlantic, aided by the society, until Liberia declared independence in 1847.

2. The average resident is under 18 years

Liberia is now more than 170 years old, but it is also one of the world’s youngest countries. According to the CIA World Factbook, the average age of its citizens is 17.8 years. By way of comparison, a typical resident of Monaco, the world’s most elderly country, is 51.1.

The population here is generally young and motivated!

3. The world’s biggest cruise ships are registered there

The cruise industry is regularly accused of flying a ‘flag of convenience’ by registering their ships in countries where employment laws are less stringent.

All but one of NCL’s ships is registered in the Bahamas; Carnival and MSC register theirs in Panama, Oceania Cruises in the Marshall Islands, and P&O Cruises in Bermuda.

And Royal Caribbean International, which possesses the three largest cruise ships on the planet, is situated in Liberia, along with 12% of the world’s entire maritime fleet.

According to David Crystal's book “English as a Global Language, more than half the population in 45 countries (excluding the UK) speaks good English.” They include The Philippines, Denmark, Germany, The Netherlands, Singapore, Austria, Finland, Malaysia, Greece and Liberia. Indeed, while more than twenty indigenous alternatives are spoken, English is the country’s official language.

5. It has Africa’s cleanest cities

The World Health Organization tracks air quality at 1,622 urban locations in 92 countries. Pakistan's urban areas are, on average, the world's most polluted, followed by Qatar and Afghanistan in that order.

Europe's most polluted cities are found in Turkey, Bulgaria and Serbia. Of the 92 countries to feature, Australia has the least polluted urban areas, followed by Brunei and New Zealand, while Liberia features 10th, ahead of the likes of Spain, Japan, the United States and the United Kingdom.

The country offers diverse views that one would not contemplate leaving as a dream. Apply today for free and pave a way to grasping more about this multicultural country!

Liberia’s economic freedom score is 49.0, making its economy the 165th freest in the 2020 Index. Its overall score has decreased by 0.7 point, primarily because of a drop in the fiscal health score.

The country is ranked 40th among 47 countries in the Sub-Saharan Africa region, and its overall score is well below the regional and world averages.

The International Monetary Fund (IMF) has completed the sixth review of the country’s extended credit facility, bringing total disbursements to over $379 million. Additionally, the African Development Bank approved a grant of $48 million in 2011 to support economic governance and competitiveness.

The country achieved high growth during 2010-12 due to favorable world prices for its commodities.

Since 2006 the Government of Liberia has instituted robust reforms that fostered economic recovery and sustained growth which also led to improved performance across all sectors of the economy.

Liberia’s post-war annual national budget was recorded at US$80 million in 2006 and has grown to US$572 million in 2012, indicating an increase of 615 percent which has expanded the national fiscal space in support of national development that has strongly driven the MDGs implementation in the short period.

DISCLAIMER: Due to the sensitivity of economic information and data privacy, RocApply publishes only authentic indices as gathered from relevant and trusted sources as attached.

Why Study in Liberia

Thanks to many international events and convenient location, Liberia has became one of the most popular student destinations in West Africa. Each year more than thousands of international students flock here to study, enriching the multicultural environment of the country. The blend of culture in Liberia something to marvel and cannot be left to the imagination!

Liberia is one of the fastest-growing destinations for students in Africa and therefore, seeks to enhance its global position as an education destination for students from neighboring countries and all over the world. Degrees taught only in English and granted here are competitive across the world. English is the medium of instruction in Liberia making it attractive to may students intending to study abroad!

Liberians are known as warm and hospitable people. In some universities you will enjoy drinking and dining with the locals. In addition to feeling the support from everyone around, establishments are committed to make the stay more enjoyable by creating student bodies for interaction.

Education in Liberia can be an affordable way of getting high-quality degrees taught in English. While there is no compromise in academic excellence, both tuition and living expenses remain considerably cheaper than most of the traditional education destinations. Most universities here also offer special scholarships that cover full tuition, thus giving more international students a chance to become part of the community. In Public Instituions tuition is free in Liberia!

Students prospecting to study in Liberia looking for Ph.D scholarship, Masters Scholarships, or Undergraduate scholarships to fund their education abroad can now check with RocApply Scholarship page for updates form the universities and the Liberian aids.

The list of scholarship range from fully funded to limited support or tuition fee waiver and we are committed to helping students acquire them!!

Liberia scholarships and grants are available for Liberians and foreign students from developing countries to study abroad alike.

It is never easy to understand how to get a student visa abroad, in Liberia the procedures don’t take long.

RocApply has decided to write a functional guide to help you understand the essential procedures and actions step by step. There are many excellent universities in Liberia.

The universities, colleges, and schools are well-known in the academic community. A vast number of international students are willing to get an education in the best universities here.

COVID 19 Update for studying in Liberia

Documents students should carry to Liberia